Wines from MOLDOVA and ROMANIA

These amazing wines from Moldova and Romania are now available in ATLANTA GEORGIA!

Wine making in Moldova and Romania goes back a long time. The ancient Greeks and Romans knew Romanian soils produced excellent wine-making grapes, and archaeological evidence suggests that wine making actually began in the region 6,000 years ago. And legend says that the Thracian god of wine was born north of the Danube River in what is now Romania. Romania sits in southeastern Europe, its eastern border facing the Black Sea. The country boasts four wine-making regions. The Murfatlar region lies near the Black Sea and enjoys 300 days of sunshine a year. The area produces sweet wines.

Farther north and inland, the Cotnari area also produces sweet wines and was a favorite of  Stephen the Great, a 15th century Moldavian ruler who even had roads paved to the area to transport the fine wine. The Tarnave wine regions sits in Transylvania.

Fossils of Vitis teutonica vine leaves near the Naslavcia village in the north of Moldova indicate that grapes grew here approximately 6 to 25 million years ago. The size of grape seed imprints found near the Varvarovca village, which date back to 2800 BC, prove that at that time the grapes were already being cultivated. The grapegrowing and wine-making in the area between the Nistru and Prut rivers, which began 4000–5000 years ago, had periods of rises and falls but has survived through all the changing social and economic conditions.

By the end of the 3rd century BC, trading links were established between the local population and the Greeks and from 107 AD with the Romans, a fact which strongly influenced the intense development of the grape-growing and wine-making. 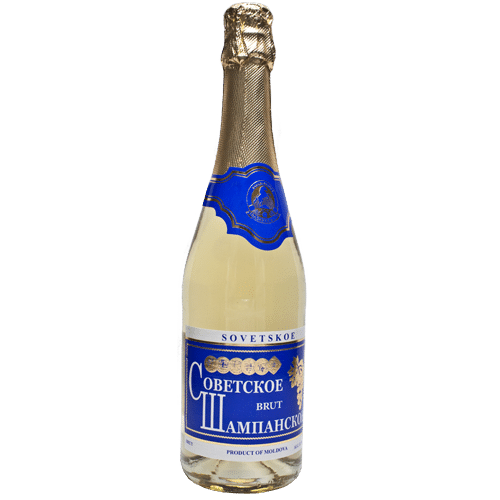 With a small amount of natural sugars remaining in the wine, brut champagne is a balance of crisp fruit, buttery notes, and minerality. Naturally effervescent, brut champagne has high acidity that contrasts nicely with the bubbles and mellows during aging.  It must be made from pinot noir, chardonnay, pinot Meunier, pinot gris, pinot blanc, petit Meslier, and/or arbane grapes. 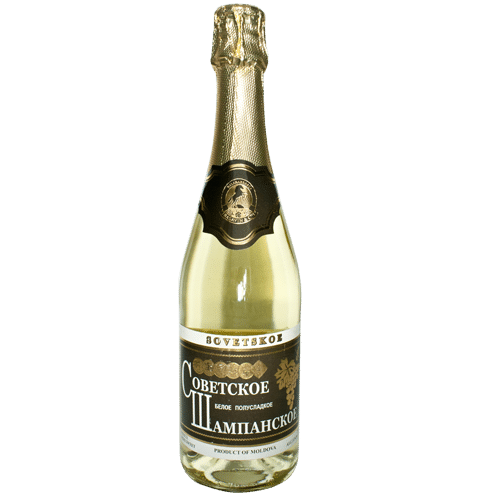 Sovetskoye Shampanskoye (Сове́тское шампа́нское, ‘Soviet Champagne’) is a generic brand of sparkling wine produced in the Soviet Union and successor states. It was produced for many years as a state-run initiative. Typically the wine is made from a blend of Aligoté and Chardonnay grapes. 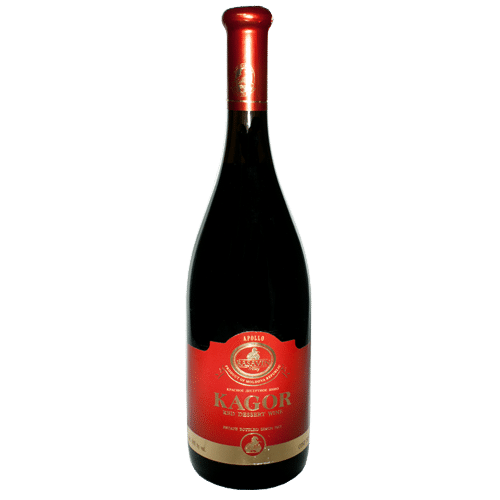 Kagor is a fortified dessert wine made from cabernet sauvignon, saperavi and other grapes on the Black Sea coast of the former Russian Empire, primarily in Moldova. 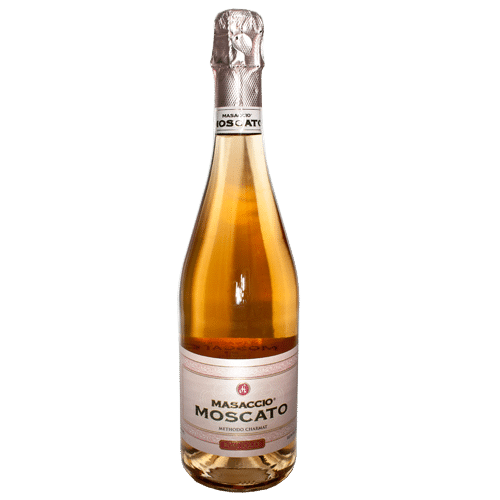 A special bouquet with unique aromatic qualities. These wines express the particularities of Moldova’s beautiful climate and landscapes. Moldova series wines are the union of local winemaking traditions and culture in combination with the best modern technologies. This way it satisfies even the most sophisticated wine consumers’ taste. These wines are produced by the classic technology, from selected grape types of “Purcari” area. This sparkling wine has flavors and aroma of pineapple, coriander, peach, orange and grapes. 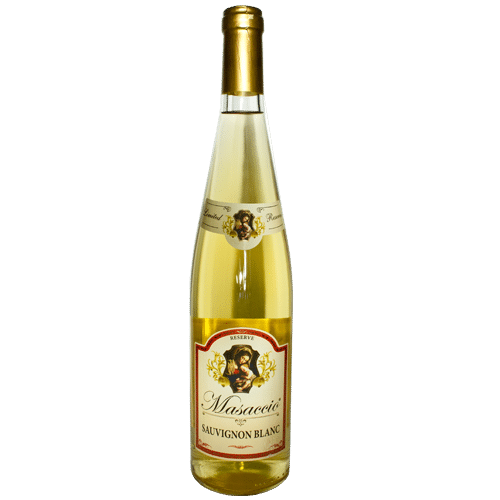 Sauvignon blanc is a green-skinned grape variety that originates from the Bordeaux region of France. The grape most likely gets its name from the French words sauvage and blanc due to its early origins as an indigenous grape in South West France. It is possibly a descendant of Savagnin. This wine is fresh and has a delicate green pepper aroma. The taste is also fresh and well balanced with a pleasant after taste. This wine is perfect with appetizers such as artichoke dip. 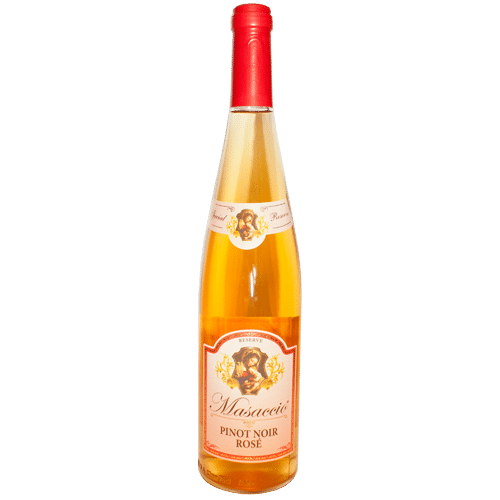 Pinot Noir is a red wine grape used in creating still red wines, Rosé wines, and sparkling wines, which includes Champagne. Pinot Noir is considered one of the most notable red wines in the world, and it’s beloved for its complex aromas and softer tannins. This wine is pink and attractive. It has a fresh berry flavor and a rounded aftertaste. It is ideal for dishes of Chinese cuisine, chicken, salmon and desserts. 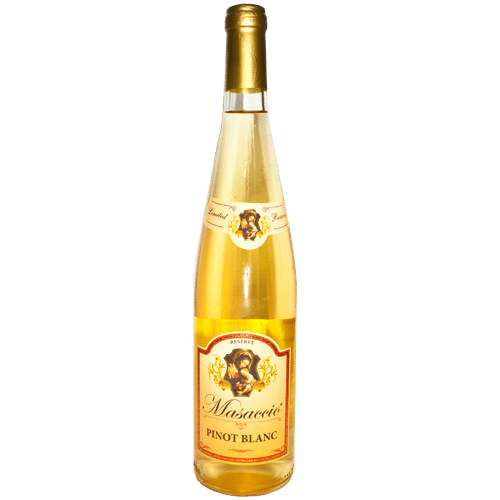 Pinot blanc is a white wine grape. It is a point genetic mutation of Pinot noir. Pinot noir is genetically unstable and will occasionally experience a point mutation in which a vine bears all black fruit except for one cane which produces white fruit. This wine has a medium to full body and light flavor including citrus, melon, pear and apricot with mineral undertones. 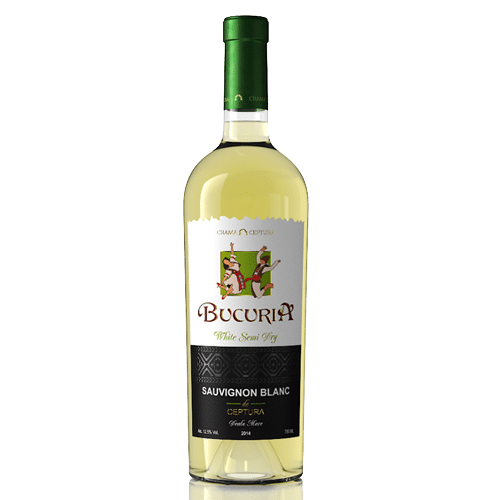 Sauvignon Blanc is a white wine that owes much of its popularity to winemakers in Bordeaux and the Loire Valley in France. The Sauvignon Blanc taste is very different from other white wines, like Chardonnay, because of its green and herbaceous flavors. The name Sauvignon Blanc means “Wild White” and the grape is related to Traminer with origins in the South of France. Sauvignon Blanc is one of the most widely planted wine grapes in the world and because of this it has a wide range of styles and flavors. 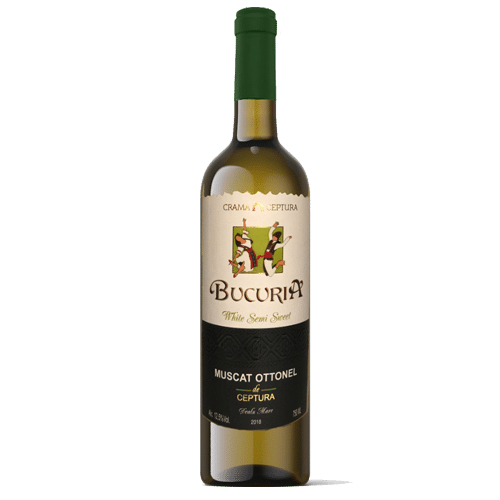 The Muscat Ottonel has the most pale skin color of all the Muscat grape varieties.  Muscat (also known as Moscato)  produces the most neutral tasting wines and ripens the earliest. Muscat wine popularity is exploding not only in the US but world-wide.
LEARN MORE 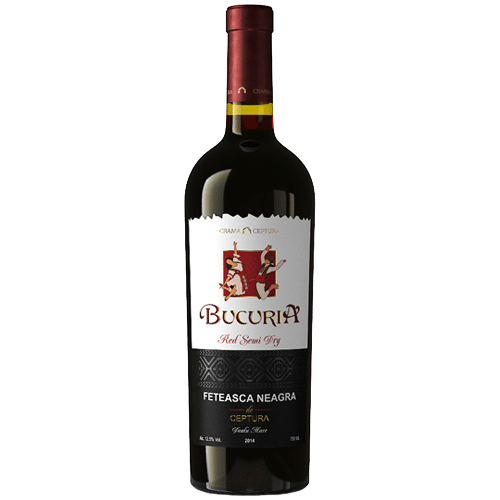 Bucuria Feteasca Neagra is a Semi-Sweet Red Romanian wine. A red-garnet wine, intense clear and luminous with a complex taste suggesting the smell of dried plums, black currants and cinnamon. It has a rich, silky, corpulent taste, with soft tannins which impresses by distinction and complexity. 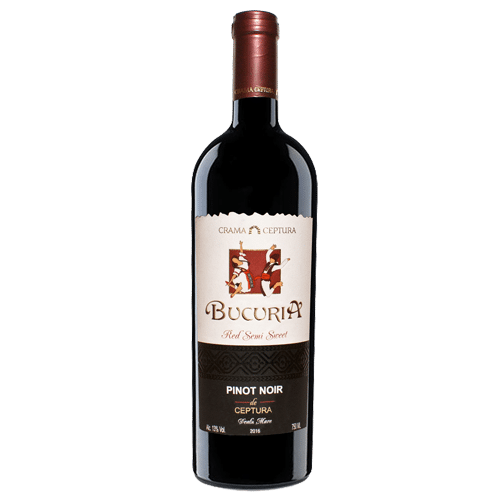 Enjoy the fruity aroma with tastes of dark cherry, cocoa and ripe plum. Velvety and PERFECT! 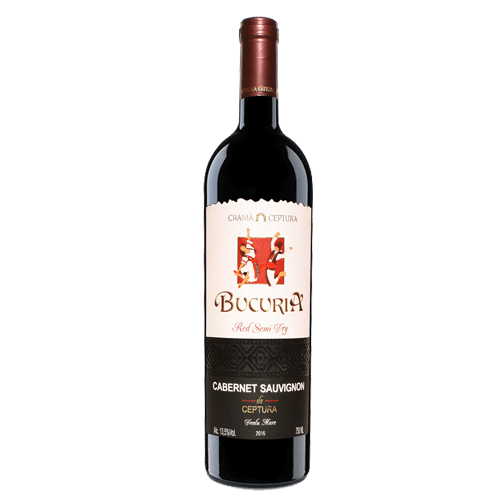 This beautiful red semi-dry wine features an intense ruby color with shades of purple. The pleasurable taste is bold and spicy with notes of ripe fruit, chocolate, vanilla and raisins. 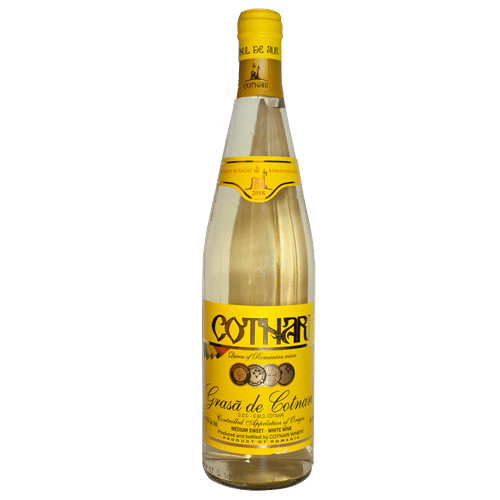 Grasă de Cotnari is a Romanian wine variety associated with the Cotnari wine region, in Iași County (historical region of Moldavia), where it has been grown ever since the rule of Prince Stephen the Great (1457–1504). 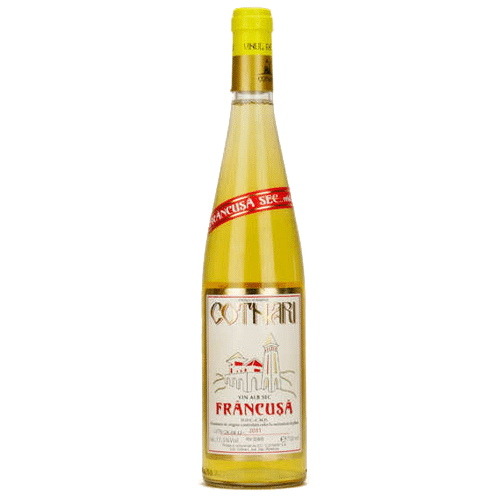 Francusa is a yellow-green grape variety indigenous to Romania. The little seen cultivar is located mostly in the northeastern part of the country along the border of Moldova. 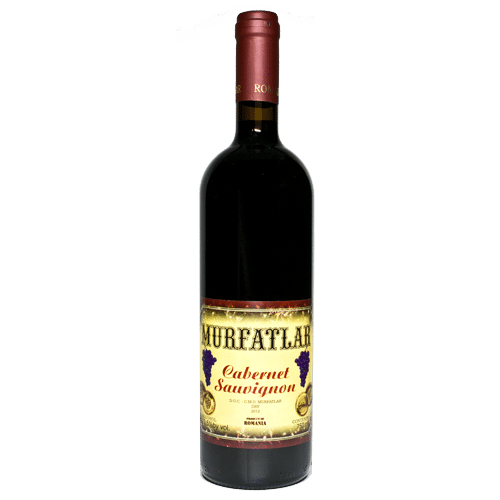 A semi-dry rose wine made from cabernet sauvignon grapes gathered at dawn, in low temperature, to fully preserve the grape’s freshness. It has the fresh and fruity traits of white wine and at the same time the pleasant color and slightly tannin oustinge of red wine. 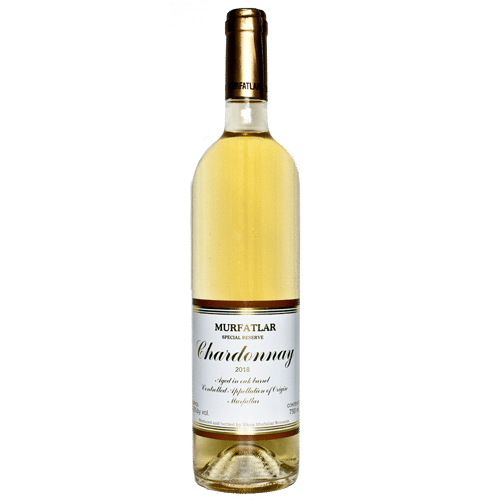 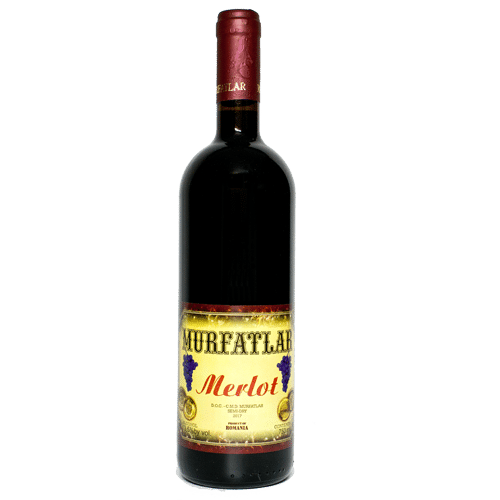 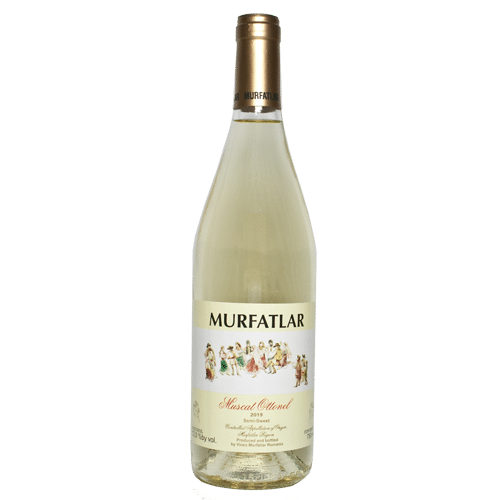 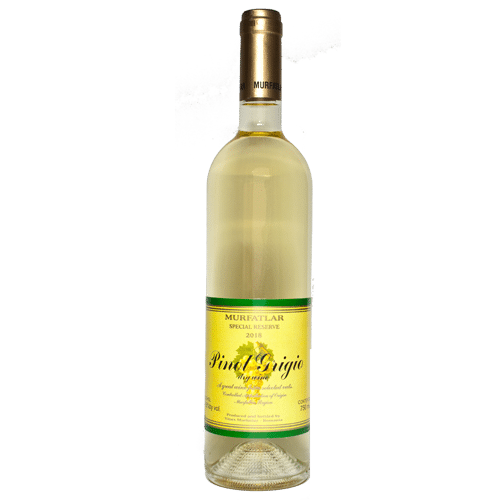 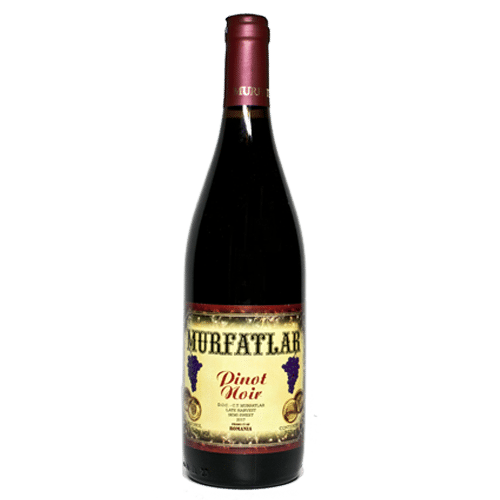 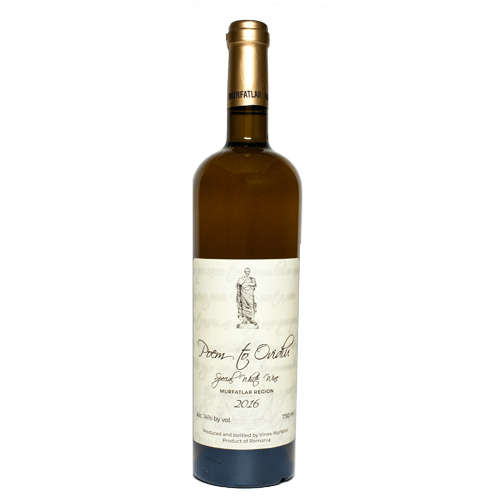 Poem to Ovidiu is an amazing desert wine. Clean, perfectly sweet with no dryness. 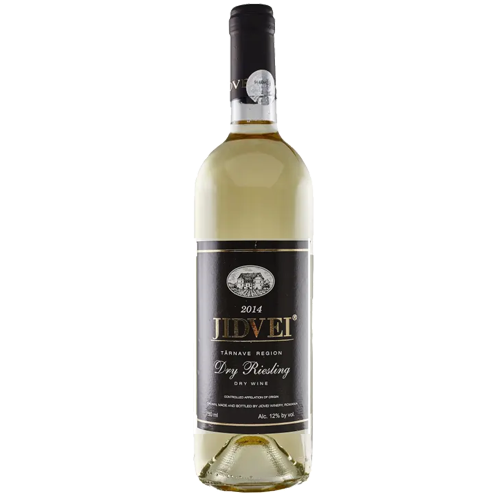 Technically, dry Riesling is defined by the finished wine containing less than 9 grams per liter of residual sugar. The fermentation process creating alcohol has converted the vast majority of sugar in the grape juice into alcohol, leaving behind the rich, bright, and crisp flavors of Riesling without any heavy, palate-saturating sugars. 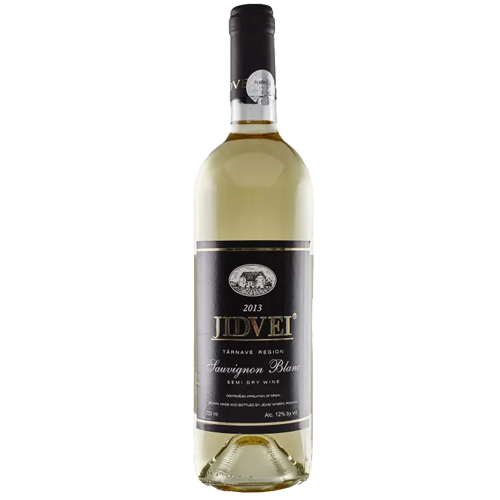 A popular and unmistakable white wine that’s loved for its “green” herbal flavors and racy acidity. Sauvignon Blanc grows nearly everywhere and thus, offers a variety of styles ranging from lean to bountiful.

Sauvignon Blanc makes a wonderful choice with herb-driven sauces over chicken, tofu, or fish dishes. matched with feta or chèvre, or paired with herb-driven asian flavors such as Thai or Vietnamese cuisine. 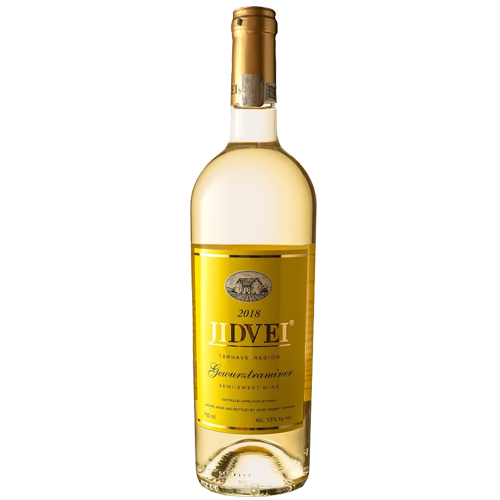 Gewurztraminer is a distinctive yet underrated grape variety, capable of producing many styles, from dry to sweet.

Like any good wine, Gewurz should be balanced. The grapes need to be harvested at perfect ripeness to avoid bitterness, high alcohol and/or overt sweetness – especially when botrytis increases the sugar level. The variety does not have as much acidity as Riesling, but neither does Chardonnay and we all know how complex, long lived and exciting the best Burgundies can be. 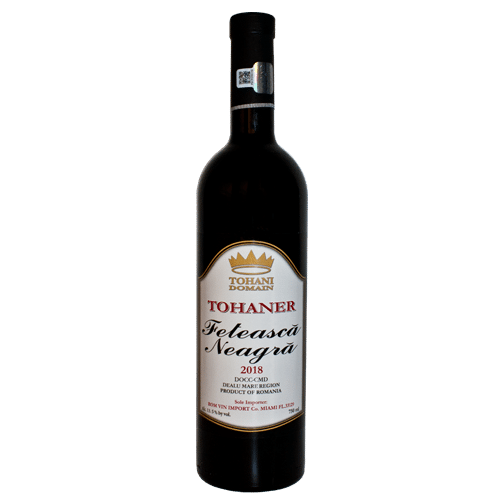 Intense ruby with movalii tones. The varietal fragrance of dried plum is dominant and combines with seasoned notes of cloves and vanilla. In taste, fruits like blackberries, raspberries and black cherries are complemented with mastery of spiced black pepper. Round tannins are well supported by the alcoholic degree.

Author’s composition, “Escapda” presents a generic detail of the Estate of Tohani: two riders who embody Prince Nicholas and Ioana Doletti, in a romantic representation of the decision of the two to follow the voice of their hearts. 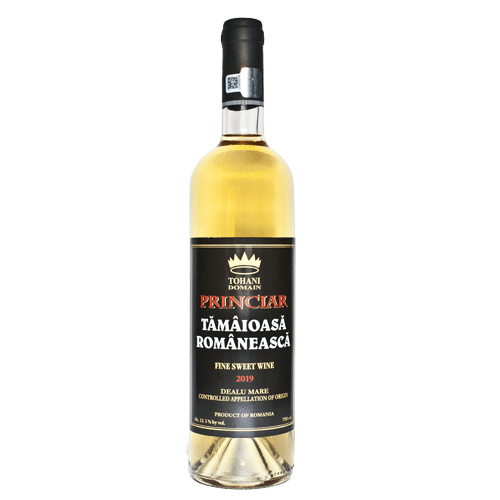 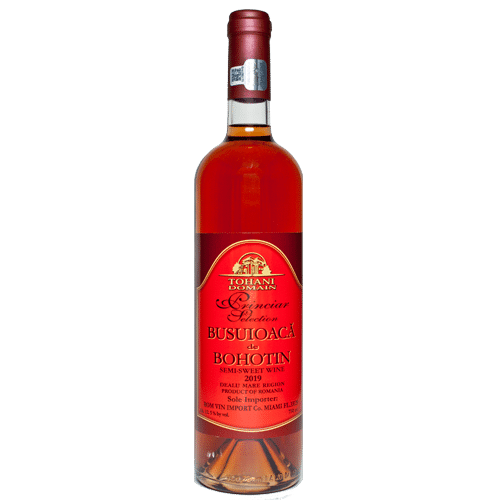 A typical colour for a wine made of the Busuiac variety – pale rose. The first olfactory impression brings us notes of slightly dried basil, of summer roses.
The taste is cool and brings us to the sweetness of roses or red fruits a complex but delicate taste, a long taste post.